Did You Know? - Nicholas Campbell was nominated for a Gemini Award for the role of George Orston in this episode.

Read about 'Asking For Flowers', the fourth episode of Flashpoint.

This job isn't easy. And this episode drives that message home hard. Sam is trying to excel at the negotiation part of the job but finds it hard. How do you connect with the bad guys? Yes, how do you indeed?

After watching all 5 seasons of Flashpoint, I learned that the guy holding the gun is not always rotten to the core. Yes, some of them are. But sometimes, it's just a guy pushed by his circumstances that cause him to make really bad choices. There's always two sides to a coin. And there's always more to a story or situation than it seems. Because every word, every action, follows a reaction. Cause and effect. Episode 5's case of the week is one of those that makes me really emotional.


Lou: Why now? What do I got to lose?
Sam: You sound very upset.
Lou: You damn straight I am.
Sam: Alright I hear what you're saying...
Wordy: Stay in control. This is your negotiation.
Sam: What do we need to do so we can all go home?
Lou: You can give me what I want.
Sam: I'd like to try.
Lou: You know what I'd really like? I'd like some coke. How 'bout that? You give me an ounce, this is over. Hello...
Ed: I'm gonna do it. Hello...
Spike: A little help here. Hello!
Ed: Hello?
Spike: Hello!
Lou: You hear me but you not doin' nothin' about it.
Ed: He's a lying pig!
Sam: I'm not a liar.
Greg: Don't argue. Just get him back.
Sam: Okay look, you're obviously very upset.
Lou: Yes. Yes. You know what that means?
Jules: You know I really wish a cop would negotiate us to safety.
Greg: Come on Sam, just talk to them.
Lou: Dude! You know what I want!
Sam: I'm not giving you cocaine jackass!
Ed: Bang. Bang.
Spike: Jackass? Did he say jackass?
Greg: Okay Sam let's talk this through.
Sam: Just give me a minute Sarg.

Greg: Long way from Kandahar huh?
Sam: I was doing everything right wasn't I? Mirroring, emotional labelling, eye messaging, everything in the book but I just...
Greg: Need to listen. Look you can kick ass like nobody's business and you look great in the cool pants, but as long as you're out there and you're trying to talk to somebody you've got to be able to listen. You've got to be able to connect.
Sam: I know. Okay, it's just...
Greg: How do I connect to bad guys when I spend 4 years shooting them?
Sam: I just need to finish this review.
Greg: No, you need time. Field training. A little patience. Okay. Remember you got the cool pants down. 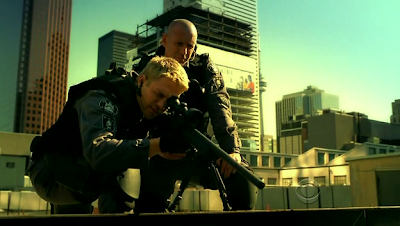 Greg: Okay, okay, you figure out how to get into the impossible building and I'll go talk to the killer with nothing to lose.
Ed: If you put it that way.
Greg: Sam you're with Ed, Jules you're my second.
Sam: Let me be second Sarg.
Jules: Easy cowboy. You know you can't blow or shoot anything up in the truck right?
Sam: I could use the field training. So long as you're scared of blowing anything up.
Jules: No.
Greg: Alright, follow me.

Greg: Okay we've got just over 2 hours. What do we do when he demands his money?
Sam: Refer to high authority, get concessions, try to keep him on the line.
Greg: Good. So how do we make a connection with this guy? Can't talk anybody out of anything if he thinks you don't understand. So what do you understand?
Sam: I don't know, guy's a thief...
Greg: You take pride in your job, so does he. Connection. Right? But remember what the point is Sam. It's not you. It's not him. It's those hostages. It's Ruth Skellar. She's the point.

George: I'm a line item on a budget, and that's about it. I'm George Orsten, 47 thousand dollars a year plus benefits. Hey wait! Way I figure it, we get some kid in here, pay him half that and no benefits cos he's part time. Hey! Where do I sign? I can't get there fast enough.
Ruth: You think I like firing people? You think I enjoy it?
George: Yeah.
Greg: George, she's having a hard time she can't help you. You stay with me. I'm the guy who can get you out of this. You stay with me okay.
Ruth: Yeah right, yeah. Cos I'm the boss bitch. I'm the ice queen. Oh you think I didn't know the nicknames? Hear the whispers. I'm the first one in every day and the last one out so I know.
George: Good for you.
Ruth: But a year ago they were gonna close this branch George, and 62 people were going to lose their jobs. 62. I came in and I worked everyone hard, yes. And I worked harder than I ever have in my entire life. And in the end? It still wasn't enough. It just wasn't. 7 people had to go. Those were the numbers. Not 62. 7. And I am sorry that you were one of the 7. I really am George.
Greg: George? George can you hear me? We can talk about all of this.
George: Talking's through. No more talk. No more talking.
Greg: Where are you going George? Where are you going? What are you doing George?
George: Put your hands out put your palms together.
Greg: Don't do it George. Team 1, standby for immediate action.
Ed: What's going on Boss?
Greg: Just stay ready.
George: Lean forward.
Greg: He's gagging his hostage, he's dehumanising her so when the time comes he can kill her. You don't want to kill her George, you don't want to kill her. Standby.
Ed: Wind's at 1.
Sam: More like 3 now. Flag down the street in front of the park.
Ed: Nice.
Sam: Thank you Sir.
Ed: Is there a problem Braddock?
Sam: I was right you know about the proper procedure.
Ed: Well that's the lead negotiator's call to make.
Sam: But I was right, manual's clear.
Ed: You know the boss wrote the manual? It's tough not being the best at something huh?
Sam: I'm trying.
Ed: It's not something you can get out of a textbook, you got to learn how to make the...
Sam: I know, I know, I got to connect. Sarg says it all the time.
Ed: Then how come you don't hear it?

George: So what's going on? Where's my money?
Greg: What I've got is 2 names. First name is George Orsten. Hardworking guy, he's done everything right his whole life. Married 25 years. Now here's the second name, Mary Orsten. A hairdresser or she used to be. Right not she's not doing so well, a few years she might not be able to do anything at all. And the kind of place that she needs to be in, doesn't come cheap. That sound right George?
George: Well you tell me Paker. Does that sound right to you?
Greg: No. No it doesn't sound right. Doesn't sound right that you lose your job and your insurance a month after you've found a home for her. You worked hard your whole life and something like Alzheimer's comes along and suddenly the most important person to you can't even remember your name. That's not right.
George: No.
Greg: Neither is what you're doing George and you know that.
George: I know. Look, I've tried Parker. I've tried. I've tried to look for another job, look for anything. It ain't happenin' okay. I've look at trying to get a loan. But what am I supposed to do at my age? It's not exactly easy out there to find a job. And then, let's be realistic about it, how am I supposed to pay anybody back? It's stupid. Okay so that's it. I'm at my wits end right here. This is my last chance.
Greg: I know you're feeling really alone right now George but...
George: Being alone, that's not what's scaring me here. I tell you what's scaring me, is my wife gets kicked out of that home and I'm not in the position where I can take care of her any more okay. That's what's scaring me okay. This woman here, my wife has always taken good care of me. Always. That's the least I can do. I gotta take care of her. I'm just trying to do what's right.
Greg: There isn't anybody in the world who wouldn't understand that. I'll bet you Ruth's family will understand that.
George: Okay. Parker look, I'll tell you what, let me talk to my wife and I'll just... I'll end this okay. It'll be over.
Greg: What do you mean over George?
George: I mean if you let me talk to my wife, I'll come out and I'll bring Ms Skellar with me okay. So let me talk to my wife.
Greg: Alright George I'll get her. You hold on.
(Greg calls Dr. Luria)
Dr Luria: Luria.
George: Hey. So he's ready to come out once he talks to his wife. Now if I let him do it he'll probably kill himself. If I don't, he'll go off and I risk losing the hostage.
Dr Luria: Hard call. 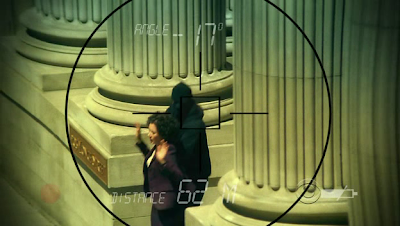 Greg: Team 1, Sierra 1, I think he's coming out. Get ready.
Ed: That's great, congratulations.
Greg: Negative. Not good. He said good bye to his wife, he put his mask back on, he's coming out armed Ed. You understand? Loss of a loved one. Mask depersonalizes him and thus he's looking for direct confrontation. He wants us to kill him. Suicide by cop. Hold fire! Suicide by cop. Sierra 1 wait on my 'Scorpio'.
Sam: Sierra 1 copy. Can't he give us 'Scorpio' now just in case this guy comes out shooting?
Ed: It's his call. He's got one more chance to talk him down.
Sam: And if he can't?
Ed: Then we do our job.

Sam: Hey Sarg.
Greg: Hey. You okay?
Sam: Yeah. You?
Greg: Sure.
Sam: Yeah?
(Greg shakes his head)
Sam: Review?
Greg: Yeah. Just tryin' to figure out where I lost the connection.
Sam: Didn't think you did.
Greg: Well, guy is dead.
Sam: Kept Ms Skellar alive though. Do you want another pair of eyes on this?
Greg: No. No I'm fine thanks. But you know, if you want...

My favourite quotes - "Jackass? Did he say jackass?", "Okay, okay, you figure out how to get into the impossible building and I'll go talk to the killer with nothing to lose.", "It's not you. It's not him. It's those hostages. It's Ruth Skellar. She's the point.", & "It's not something you can get out of a textbook."

Read about 'Attention Shoppers', the sixth episode of Flashpoint.


* Poster from the website TVpedia with screen grabs from the show.

Posted by the eclectic reviewer at 11:10